Michael Shermer might be right in that we don’t have any fossil evidence of that very first instance of a cell. Krauze is mostly right when he said

If you want to know how the first cells looked like, you need to look at present-day life and work your way backwards

I would contend that evidence is building that the very first instance of life was complex without any antecedent. There are ample evidence the earliest life was complex. Stromatolite fossils are found in Australia and Greenland, some of these fossils are dated at 3.5Ga to 3.8Ga. Stromatolites are the byproducts of cyanobacteria. This would mean that the mechanism for life such as DNA, RNA, cell functions and reproduction, and the metabolic pathways for photosynthesis were already in place right after the late heavy bombardment of 3.8-3.9Ga.

Direct microfossil evidence have also been found by William Schopf, that dates back to 3.5Ga. 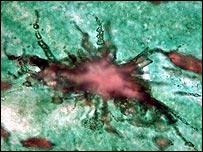 Here is a paper that corroborates the presence of oxygenic photosynthesis to 3.7Ga.

Abstract
ÃƒÆ’Ã†â€™Ãƒâ€¹Ã…â€œ s3700 Ma metamorphosed pelagic shale from West Greenland contains up to 0.4 wt% reduced carbon with N13C values down to 325.6x [PDB, PeeDee Belemnite]. The isotopic signature and mode of occurrence suggest that the carbon derived from planktonic organisms. The Pb isotopic composition shows that the shale had high primary U/Th. This indicates that organic debris produced a local reducing environment which precipitated U transported to the site of sedimentation by oxidized ocean water. The existence of highly productive plankton that fractionated C isotopes strongly and set up oxidation contrast in the environment suggests that oxygenic photosynthesis evolved before 3700 Ma.

William Schopf’s team has also developed a method to get a 3-D look at Microscopic Organisms that has the potential to identify cellular morphology.

Evolution for Everyone
Its All About the Evidence...Evidently!
Intellectual Barbarians